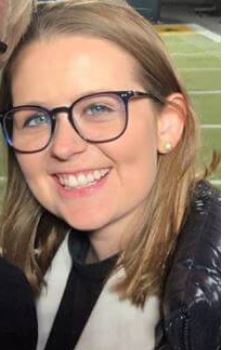 Sally Doocy is the daughter of a famous American Political Commentator and Author, Steve Doocy. She was born on July 31, 1993.

Her dad posted this picture and captioned it as,

Her Father Steve Doocy met his wife, Kathy Gerrity in Washington, D.C. At that time, she was Sports Anchor, and Steve was a reporter at WRC-TV.

He was already attracted to her when he saw her on tv.  He was the one who made the first approach.

After knowing each other well, the couple started dating.

And on June 30, 1986, the couple tied the knot with each other officially. The couple together had three children named Peter Doocy, Mary Doocy, and Sally Doocy.

All family poses for the camera on Father’s Day. This picture was shared by her father and captioned it as,

Got married in pandemic

Sally dream wedding was fixed one year in advance. The wedding was supposed to be held on May 2, 2020. She was in a long term relationship with her boyfriend, Ali Sadri.

She met her boyfriend, Ali Sadri, at Southern Methodist University and fall in love with each other.

But due to this pandemic that is going on the world right now, they canceled the one year planned wedding. The wedding got rescheduled on August 1, 2020.

She is with her dad and boyfriend. This picture was shared by her dad on his Instagram and captioned it as

However, the global pandemic did not stop her from getting married to her longtime boyfriend, Ali Sadri.

The couple got married on August 1, 2020, with the presence of the family of both sides.

Suddenly the Priest that was supposed to conduct and officiate the Wedding unexpectedly passed away.

It was very disappointing news for the family and bride & Groom.

They needed a new venue and a new Priest to conduct the Wedding.

Looking at the situation, her brother (Peter) decided to become Priest and officiate at the Wedding.

One year back, peter was requested by a Fox channel producer to officiate at his Wedding.

He has even applied for a license for $40 and became an authorized minister who can marry people. So, he checked his license if it was valid or not.

Fortunately, his license was valid in Florida, and it was such happy news for the family.

After Sally got married, her dad shared a heartfelt post along with pictures of her wedding day. He wrote,

He told his idea to his younger sister Sally, and she agreed. And Wedding was held in rescheduled date.

As it was not an easy job to get his sister married and he even choked while introducing her younger sister as ‘Mrs.’ but he controlled himself and conducted the wedding.

This shows that Peter is such a caring and loving brother to his sisters. Also, they share a great bond.

Her net worth is not out yet, but her father (Steve Doocy) is estimated to have a net worth of $11 Million. His annual salary is $4 Million.

His primary source of earning is an active Tv Journalist. His morning Show Fox Friends is viral.  He has even written two books based on family life which was bestselling books.

He lives with his family in New Jersey with all the luxurious facilities.

For Amazing Articles Of Your Favorite Celebrities, Stay Tuned To vergewiki