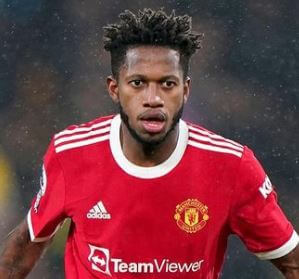 Fred, born Frederico Rodrigues de Paula Santos, is a Brazilian-born professional footballer. He plays for Manchester United and the Brazil national team as a midfielder.

He was born in Belo Horizonte, Brazil, to his parents, father Delson Rodrigues, and mother Roseli Miranda de Paula.

Married his girlfriend, who is a chemical engineer

Frederico Rodrigues de Paula Santos married his girlfriend Monique Salum, with whom he had been dating.

The couple went public with their relationship only in 2016. After a romantic proposal in 2018, the couple exchanged their wedding vows the same year.

His girlfriend turned wife Monique studied at the University Center of Belo Horizonte and is a chemical engineer.

Threw a grand reception party in 2019

Fred and Monique exchanged their wedding vows in a private ceremony in the summer of 2018 in their native Brazil.

They decided to throw a grand reception party in 2019, inviting their loved ones. The party was right before the Manchester United pre-season.

He thought that he would not be able to get married at the end of the last season, thinking he would be part of the Brazil national team for the summer’s Copa America, but unfortunately, he was dropped by Brazil and was not even included in the squad following his poor performance in the last season.

He was later mocked by his friends in Manchester United for having booked his marriage in July, pleading then-manager Ole Gunnar Solskjaer for time off.

Frederico is the father of his son Benjamin whom he shares with his wife, Monique.

The couple became parents for the first time after welcoming their son Benjamin in January 2019.

Who are the major impacts in his career?

His family is undoubtedly a major impact on his career. His father signed him for football training when he was just four, and by the age of 10, he was already playing for Atletico Mineiro.

Throughout his journey from Atletico to Manchester United with Internacional and Shakhtar Donetsk in between, his family was always there to support him as it was a dream of everyone in the family.

Besides his family, he credits his former youth coach Fernandao for playing a major impact in developing him as a player.

Fernandao, who died at the age of 36 in a helicopter accident, was a player as well as a coach at Internacional at the time when Frederico was playing for Internacional.

His advice helped Frederico a lot in his career and feels grateful forever.

He made his senior international debut in 2014. He has amassed an impressive net worth from his glittering football career.